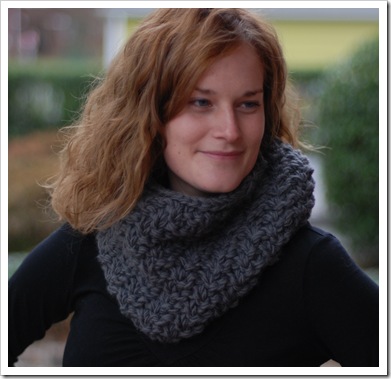 Greywacke is a thick, chunky cowl inspired by sedimentary rocks composed of feldspar, quartz, and clay. They are commonly found in Wales, Scotland, Ireland, and England, where a cowl like this would usefully shield you from the wind and rain.

Gauge: Not crucial, but approximately 1.5-2st/inch in Greywacke stitch pattern. 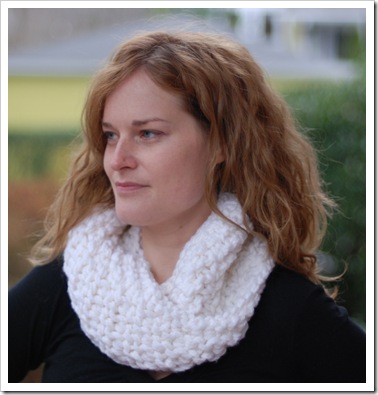 Greywacke is knit in the round, using a simple pattern.

Optional: To make the twist (shown in the cream colored version), rotate the first stitch one full turn around the needle.

Place marker, and join to work in the round.

Knit 1 row, then begin pattern, which is a 6 row repeat:

Weave in ends. You may also spritz the cowl with water and toss it in the dryer for a few minutes to make it softer and denser.

OK...I had to comment...lovely cowl...but even lovelier is the name...and that you explained it! I did my thesis research on greywacke...

beautiful! saw you wearing the white cowl at the Loops shop in South Phila. and it was more beautiful in person. I will make this ... so it's 900 yards total - correct? - 3 - 300 yards held together.

Nice meeting you too!

I love it when my hobby and my degree/school/etc intersect. And I love the pattern!

Greywacke is also a major rock type in New Zealand, in particular the South Island :-).

Love the cowl, I am sure it will feel right at home here :-)

This pattern looks beautiful. I want to try it but, what do you mean by "rotate the first stitch one full turn around the needle"? I'd like to get the twist in.

I also would like the rotate the stich full turn direction.. Really want to make this cowl but that has me confused...

Sorry for taking so long to respond--I've been out of the loop with my knitting stuff as the end of the semester is always extra busy for me.

It is hard to explain what I mean by the twist except by "rotate" I mean that you literally twist/turn the first stitch around the needle it is already on (left needle), then knit it as usual. So instead of "join without twisting" (as is usual for knitting in the round), you do a twist instead. Does that make sense?

I would like to make this but 8" in length does not sound like it will be long enough. Could that be a misprint?

Because you knit the cowl in the round, it will end up 8" from top to bottom as you are knitting. You can always keep going if you'd like to knit a thicker cowl.

You could also create a longer cowl if you'd like to double it up more easily. You could cast on 54 or 60 stitches, say (I think that would work with the stitch pattern).

We have a Loops Yarn shop in Milwaukee & now I need to make another trip there!

The cowl looks simple & beautiful; knitting/crocheting is my stress relief from school and now have another project to add to my list!
Thanks!

Could you tell me a web site that shows you how to work in the round? I am new to knitting.
Thanks

I'm very excited to make this cowl for a dear friend, but another poster commented that it would be inexpensive...not at my yarn shop! With 300 yards, and the yarn referenced (including substitutions), I'm looking at just under a $60 project (and that doesn't include buying the needles..Still, this friend is beyond worth it. Hope I don't screw it up!

I have one thing to ask, can you use the "Cat Bordhi" method with this pattern. Just by dividing the cast on in half then fallowing the pattern? New knitter!!

Can this scarf be knit on straight needles using the same pattern rather than in the round?

Pamela--Yes, you could knit this flat. You would have to reverse the pattern. You could either:

purl the even numbered rows instead of knit

Then you would simply seam the two ends together.

What is the long tail method?


Harper, by Katie, published in Popknits.

Lady Macbeth Armwarmers, by Katie, published in The Anticraft.